Unlike Gabaldon's novels, this blog has a sexual references warning. 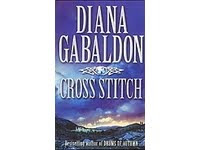 Luckily my number of blog readers tally on one hand so there's little chance of upsetting anyone with what I'm about to say; Cross Stitch otherwise known as Outlander by Diana Gabaldon got me so angry I wanted to ram a felt tip pen up my left nostril and stir it around a little. But only after thoughts of tearing up my copy, bringing it in to work, shredding the torn fragments, taking the mess to the beach, setting fire to it in a big metal drum and dancing around the flames. There! Ha! No offence to this author's legion of fans. 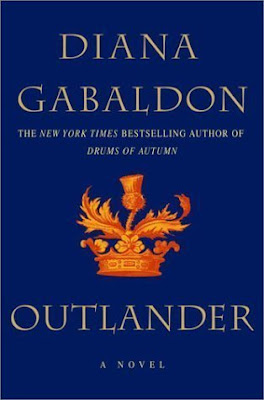 Before anyone starts backing away slowly, I'm not an easily offended prissy person and Gabaldon is not a bad writer. Bloody pus-filled violence and mayhem? Whatever. Sex of every mathematical combination of orifices and protrusions? Bored now. It's not even the graphic sexual violence which flipped my switch and brought out the Mr Hyde hatred. 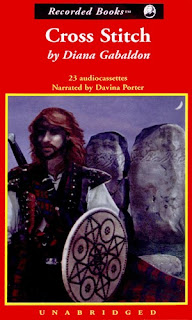 If that's husband2 on the cover, he's a little hairy

The heroine of the story Claire is a vivacious, independent and opinionated WWII nurse holidaying in Scotland with husband1 when she accidentally travels back in time 200 years. There in the Scottish highlands she uses her modern medical knowledge to stay safely useful, goes through an arranged marriage to husband2, lots of explicitly described sex and other adventures. The faint of heart might fluster at her short memory of husband1 but time travel trumps bigamy anywhere.

This book got a 4.5 star rating from amazon.com. I felt duped. By mid point I was bored enough to stop, but I'd already taken 400 pages to get there. The dilemma was won by the lack of alternative reading material and a 3 hour commute on public transport. What the hell, reading on can't hurt, it's only a book right? I was so wrong. A few pages later I was practically hyperventilating and wanted to throw the paperback tome across the carriage. Instead I settled for crumpling up the bookmark in my tight knuckly fist and chucking a self-righteous public tanty. Grrr!

I understand it's Scotland 200 years ago. I understand that women had no rights. I accept that husbands might have beat their wives if they weren't slavishly obedient, and some of the bastards may have enjoyed doing it too. So when he half-smothers her, holds her down for a beating with a leather belt the whole night it was no shock. But then the 20th century time traveller wife began believing she deserved it the day after the bruising belting and of course...rushed into the next steamy sex scene! Did he beat the self-respect out of her too?

Husband2 may not know better, but the protagonist should. Up until then she was a tough nut and this "My bad, I deserved it" drivel was utterly inconsistent with the past character development. I felt betrayed and manipulated, having hitched a ride on Claire's back and starting to feel comfortable slumming it vicariously through the feisty outspoken heroine. You can't say it's just a book, we read novels to get under the main character's skin, we're supposed to relate to her. Isn't she meant to learn and grow so we can experience it by proxy? This subjugation was no sweat for her but her reasons for believing she deserved it were totally unconvincing. My brain wanted to throw up what it'd taken in. She doesn't even have the temper to withhold sex or give the silent treatment. The day after the brutality husband2 gives her some sob story about how he got dealt a hard life, and she fondly tells him "I love you" unprompted for the first time. Nothing squeezes the heart like a beating with a heavy belt.

But that's not all, there's plenty of other unhealthy side dishes in this meal. Graphic sadism, masochism, rape, sexual torture come in bite-size chunks. If you're a sexual or physical abuse victim Stay Away From This Book. What boggles my mind is how popular and highly reviewed this book is. I read somewhere Claire and husband2 were destined for 'great literary couple' status like Scarlett and Rhett or Romeo and Juliet. I might have vomited a little in my mouth. Why is wifebeating husband2 so popular and swoonworthy among the fans? He was so bland that until they got married I thought he was a support character. There's too much sex and too few obstacles for any effective sexual tension or chemistry.

So... continue the novel while shoving a pencil up my nose and sticking a knife in my ear, or  just stop reading? The other alternative was to persuade myself that after the beating she actually went mad so there's no rational explanation for her behaviour. But then realised I didn't care enough, and had better things to do.
Posted by Starheart

Wow... this book has me ticked off and I haven't even read it or heard about it before. Thank you for alerting me NOT to waste my time!

It makes me so mad when books are raved about, so I read them, but they're crap. Oprah's book club recommended "The Story of Edgar Sawtelle." So I read it and loved the majority of it... [spoilers] until I read the end and everyone dies and there's no real explanation. I was depressed about it for a week! I kept overanalyzing everything and thinking, "What was the point!?" After scouring through a few book forums, looking for answers, someone mentioned some symbolism at the end that made me feel better... but overall, I felt duped. I still get mad when I think about it. Way to go Oprah!

I just had a thought... as much as we hate Husband2, what if he were played by RA? Would his Gisborne-effect of taking a baddie and giving him a soft side work with this one? Is that how some readers view him... as a dark soul worth loving? (I'm trying to figure out why people would find him romantic.)

Better run for cover. LOL! There is a rabid legion of fans on this one. I don't hate the book like you do (then it's been almost 20 years since I read it so maybe I might hate it), but I never have understood the great fascination for it either. Oh, I respect that people have different tastes, but I never could get past the protagonist's convenient memory. "Time travel trumps bigamy anywhere." LOL!!

I HATE time travel anyway because it's the worst kind of Mary Sue. Plus, this book is just a variation on a theme of bodice ripper. I think of any of those I've read the female in question usually likes the ripping -- at some point anyway. :D

As for RA playing the neanderthal with a heart of gold, Oh, I might want to watch that, but would that make me more drawn to a "heroine" like Claire? I doubt it.

My theory from the amazon.com reviews is that husband2 is something like Robin of Locksley. He's a very young man, and the main character is something of a cougar!

[SPOILERS]They've written him as a teenage hearthrob, so he's tall, handsome, well built, doesn't swear, is an obedient catholic virgin groom. The sympathy and reader love I think comes from him having gone through lots of beatings and whippings. Later he gets beaten, whipped and tortured some more. Personal preference I suppose, but he was about as interesting as Robin.

There were characters in this that could have been played by RA, though lots of story elements would have to be played down. One of the Very Bad Guys is a great great great uncle or something of husband1 and looks exactly like him. Meaning that she can't help looking at him and be 'stirred' Guy-style. Then there's husband2's cousin who is a big burly and older more experienced warrior involved in a secret rebellion among other things. So by comparison husband2 is such a boring young pipsqueak compared to the other very dark and murky souls.

Interesting. Not sure I've heard of this book and I definitely haven't read it, but it doesn't sound like something that'd be worth reading either, so cheers for that! :)

Maybe the love of the brute comes from the same sort of thing as the love for Heathcliff of "Wuthering Heights"? He's a crazed psychopath and tons of women fancy the pants off him! I just want to run the other way, because I really don't see the appeal. Okay, Tom Hardy's recent portrayal swayed me a little, but not enough. If women can love Heathcliff, I suppose they can love husband2 as well.

Thanks for stopping by. Yeah totally 'not at all' RE Robin while Guy was around.
This sort of book isn't my cup of tea either but it's what happens when you set up a blogsearch for pages that mention N&S, then you discover they have other obsessions detailed on their blogs and you think "Hmm, they have good taste in loving N&S, so maybe i should give this other thing they like a go?"

I just saw part 1 of Tom Hardy's recent portrayal! He's such a babyfaced heathcliffe. If I was 20 years younger maybe i'd see more appeal.

I haven't read this and might have to give it a miss from the description you give, Ragtag. I suspect it might be something I would pick up and never finish reading. As you know, the "baddie loving/wish to find some good" tendency in people is something that fascinates me. I'd like to study this a little more.

I watched the first part of "Wuthering Heights" the other day. I wasn't drawn to Heathcliff at all. I'll watch the next part with interest to see if my opinion changes.

MTA: (I'm up to ep. 8 of RH S1 and I don't mind Jonas Armstrong's "boyish" Robin - he's not heartthrob material but neither is Guy who is still not impressing me greatly. Both of them expect women to be submissive.).

Hi Mulubinba,
I understand your fascination. The book may have been boring and the characters put me off, but i'm very interested in reading other people's reviews of this book. There's stuff like "Read it. Trust me, i'm a historian." or "I challenge anyone to read it and not fall in love with husband2" or "don't worry about the time travel element, it's really a passionate love story with a perfect hero". It's enough to make you wonder if we're talking about the same book!

They are making a movie from Outlander next year. I have read the book but did not care for it. It is hard for a romance novel to hold my attention very long. Outlander got excellent reviews but I just could not get into it.